Projects are composed of Subjects which are made of Skills (or Skill Groups) and a single skill defines a training unit within the gamification framework. To complete a skill, users may need to perform the same action multiple times - repetition is important for retention after all. A Skill definition specifies how many times a skill has to be performed. Each occurrence is called a Skill Event.

To create a skill, navigate to Project -> Subject then click on Skill +, the following skill properties can be specified:

To calculate the total points that completion of a particular skill will give a user:

Time Window is a powerful feature that limits awarding of points to a maximum number of occurrences within the configured time span. This feature provides a balance between requiring repetition of an action and spacing out that repetition.

“Repetition is the mother of learning, the father of action, which makes it the architect of accomplishment.” - Zig Ziglar

When designing a gamification profile, the Time Window must be considered in conjunction with the Occurrences to Completion property. For example, you may want to require 30 occurrences to complete a skill but only up to 5 occurrences within a 24 hour window. This means that it will take a user at a minimum, 6 days to complete this skill. Here are the properties for this hypothetical example:

This is just a fictitious example and values will depend on your gamification needs.

To use an existing Skill as a template for a new Skill, you can use the button available on a Skill row displayed on the Subject page. This will open a new Skill dialog populated with the details of the selected copy-from Skill. The name and id will be prepended with Copy of which can be changed before the new Skill is saved. Saving this dialog will create a new Skill that falls within the same Subject as the copy-from Skill.

Skill versioning is a mechanism that allows the addition of new skills without affecting existing software running with an older skill profile. Versioning is mostly pertinent to the Display Libraries that visualize the skill profile for the version they were declared with.

Here are simple steps to enable Skills Versioning in your application:

Let's walk through a simple scenario to get a better understanding of how Skill Versioning operates.

We have developed software and are releasing a version 0 that integrates skills display and event reporting using the Vue.js library. In the initial release, all of the skills will be created with version 0. The integrated display component will then be initialized with version 0, like this:

This software instance will then get deployed and the skill profile for version 0 is displayed.

Now we are working on the next release which we will label as version 1. Any skill created with version 1 will not be visible in the already deployed software, configured to visualize skills with version 0. The version will need to be updated in the integrated display component to use version 1, like this:

The updated software running the version 1 profile will expose skills declared with both version 0 and version 1. Both versions of software can then run simultaneously and each version will present its own gamification profile.

The skills from previous versions are automatically included, so version 3 will contain skills declared with versions 3, 2, 1 and 0

Conveniently, the Skills Dashboard provides a way to view the Client Display for a specific version. Navigate to Project -> User -> Client Display and then select a previous version on the drop-down located above the client display.

There maybe a special situation when you want to give a user credit explicitly. Project admins can add Skill Events manually through the Dashboard:

This section explain how various scenarios are handled when skills are modified/removed/added AFTER your application users already earned points, completed skills, achieved levels and obtained badges.

Recall that Occurrences to Completion is the number of successful occurrences to fully accomplish a skill. Any users that have already completed the skill based on the lower number of occurrences will now have an opportunity to complete new/additional occurrences and earn those points.

Additional occurrences will cause a completed skill to be worth additional points which in turn may shift the points profile of a user, technically placing certain users outside of their currently achieved level. If so, those users will NOT lose their current level (per our overall strategy) but rather it will take them a bit longer to achieve the next level.

If the increase to occurrences was made for a skill that belongs to a badge, then any user that has already earned that badge will retain the badge achievement.

Recall that Occurrences to Completion is the number of successful occurrences to fully accomplish a skill. Points are subtracted for users that already achieved the removed occurrences.

If the removal causes a user to qualify for achievement of the edited skill, then that completed skill is awarded to the user. Subsequently if the completion of that skill completes a badge then the badge is awarded to that user.

Any previously achieved levels and badges are retained even if the removed occurrences contributed to the achievement of those levels and/or badges.

For a given user, if this was the last skill to be completed before a badge is achieved then the badge is awarded to that user.

New skill will equate to extra points which in turn may shift points profile which then may technically place certain users outside of their currently earned level. If so, those users will NOT lose their current level (per our overall strategy) but rather it will take them a bit longer to achieve the next level.

In-Project Skill Reuse is a feature that facilitates the reuse of skills within the same project. A skill can be easily reused within another Subject or Skill Group. Reused skills are read-only copies and cannot be mutated. As skill occurrences are reported to the original skill they are also automatically propagated to the reused skills. Changes to the original skill (ex. description, occurrences) are automatically synchronized to all the reused skills as well.

To reuse a skill navigate to the Skills page (Project -> Subject), then select skills to reuse and click on the Action button located on the top-right above the skills' table. Select the Reuse in this Project button to initiate the process.

Once the skills are reused you will see a REUSED tag next to each skill.

Please note that when skill occurrences are reported for an original skill, SkillTree checks whether that skill was reused. For every reused instance the occurrence is queued up to be propagated to that reused skills. The queue is handled in an asynchronous manner so there is a small delay before the skill occurrence are reflected in the reused skills.

# Modify skill in the original project

# Self Reporting and Reused Skills

The Self-reporting "I did it" button is visualized for each reused skill in the Skills Display and Progress and Rankings views.

Move Skills is a feature that allows project administrators to move skills to other subjects or skill groups within the same project. When skills are moved, users' points are preserved for those skills and level-based achievements are properly re-calculted for both origination and destination subject/group.

To move one or more skills please navigate to the Skills page (Project -> Subject), then select the skills to move and click on the Action button located on the top-right above the skills' table. Select the Move Skills button to initiate the process.

Skill tagging is a feature that allows administrators to add one or more custom "tags" to skills. Adding tags to skills can help to categorize and group skills, giving users another way to search or filter a particular set of skills. Skill tags are visualized in the Skills Display to give users consuming the training another way to comprehend, categorize and filter skills.

To tag skills, navigate to the Skills page (Project -> Subject), then select skills to tag and click on the Action button located on the top-right above the skills' table. Select the Tag Skill button to initiate the process. After a tag has been added, it can be removed by selecting the skills you would like to remove the tag from, then click on the Action button, and then Remove Tags.

Once a skill tag is created, you can easily reuse it to tag other skills by selecting it from the Existing Tag drop down menu. 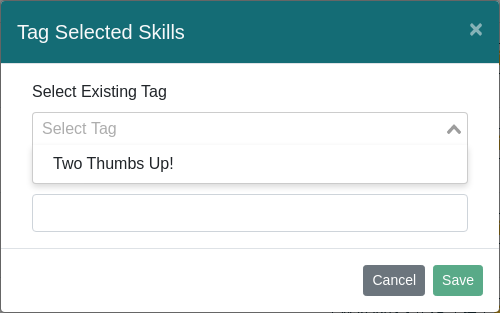