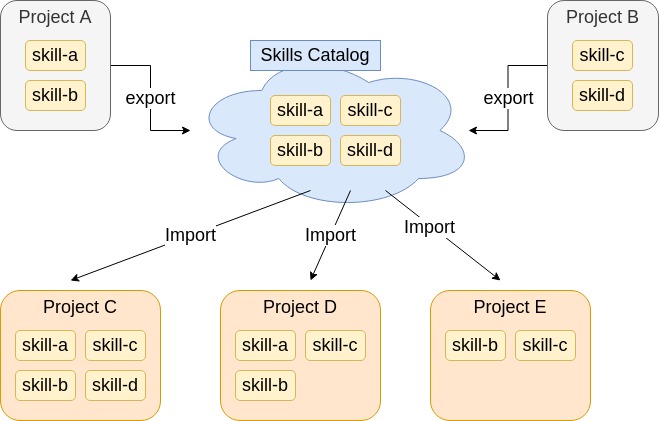 To export to the Skills Catalog please navigate to the Skills page (Project -> Subject), then select skills to export and click on the Action button located on the top-right above the skills' table. Select Export to Catalog and proceed with the catalog export.

Once skills are exported to the Catalog you will see an "Exported" tag next to each skill. You can also review and manage currently exported skills on the Skills Catalog page (Project -> Skill Catalog)

Catalog Skills can be easily imported by navigating to the subject's page (Project -> Subject) and clicking the Import button on the top right. The import dialog allows users to locate, select and import one or more skills.

To import skills into a Skill Group expand the group and click the Import button under that group.

Please note that only Point Increment can be modified, the rest of the skill's attributes can only be mutated within the original project.

Once the skills of interest are imported and optionally edited, then it is time to Finalize the import. The finalization process enables the imported skills, migrates users' points and calculates achievements for those users.

Please note that it is important to import all the intended skills before performing the finalization step. Finalization migrates users' points from the original project and calculates achievements. Since adding new skills changes the point layout of the project, incremental import/finalization may cause users to prematurely achieve levels.

Once at least one skill is imported, the SkillTree Dashboard display the finalization alert with a Finalize button.

Please click the Finlize button to get started. Please note that the finalization process is expensive and may take several minutes.

Finalization is a very important step in completing the import of skills. The Finalization process will make the following modifications:

The Finalization process exists to protect importing projects from premature level achievement. Levels' are, by default, calculated based on a percentage of subject/project points, therefore as skills are added/imported the points required to achieve a particular level are adjusted and any users who meet the current requirements are awarded those level achievements. Consequently, as a best practice, it is important to import as many skills of interest as feasible before executing Finalize.

Please note that the finalization process is expensive and may take several minutes to complete.

This section will cover several features and inner-workings of the Skills Catalog.

# Modify skill in the original project

Catalog exported skills can be mutated at any time. After the attributes of the original skill are mutated they are queued up to be propagated to all imported versions of the edited skill. Please note that skill attribute propagation is performed asynchronously, it may take a few moments for changes to appear in all imported skills.

# Self Reporting and Imported Skills

The Self-reporting I did it button is visualized for each imported skill in the Skills Display and Progress and Rankings views.

Skills with dependencies can NOT be exported to the Skills Catalog. Since those skills require completion of its dependencies first they make poor candidates for re-use in other projects.

On the other hand imported skills can be added as dependencies to an importing project's native skills.

When a skill exported to the Skills Catalog is removed all of its associated imported skills will also be removed. SkillTree will warn a dashbaord user if that skill was imported in other projects. However, please remove with care.